Before you start buying guitars in principle, the article I wrote, because I bought several guitars and friends helped in the selection and as a result I have some experience in buying a guitar. I hope that after reading this article, you will be able to make the right decisions and avoid some mistakes when buying a musical friend (or friends – as you like). The first thing you need to do is ask yourself the following questions: 1) What style music you want to play? The style of music you're going to play will help determine what type of guitar you should look for. For example, the electric guitar it would be desirable to use when playing such styles as rock and metal, classical guitar for classical music (it's not obvious?) Or, maybe, if you love to sing at the same time to play along on guitar, acoustic guitar – the best choice. 2) How much are you willing to spend? Buying a guitar – it's investment in your musical development. It is important to ask yourself how much you're willing to spend. If you save too much, then maybe you buy a guitar discourage you all want to continue to play because of poor quality sound, rattle strings (with maladjustment bars), and so on.

At the same time, I think it is not necessary in the first stages of learning to fly guitar for 15-25 thousand rubles. Learning to be good to buy a guitar worth 3-6 thousand rubles. (If Of course, it satisfies all the requirements which will be written below). Choosing a guitar After answering these questions, let's move on to how to choose a guitar for your purposes. 1) You must watch and listen as much as possible more guitars. No need to rely solely on price is more important to determine the best tool on the quality of its sound.

2) Double-check the guitar on the presence of physical defects. If you buy a guitar supported, then say little wear and scratches. If the injury serious and has a cracked timber, the sound quality of this guitar is low. Another major drawback is the twisting of the neck along the neck and gitary.Posmotrite make sure that there is no distortion. 3) Check the strings, holding them in each of the frets. There should be no chatter, and the sound should be smooth and clean. 4) If you decide to buy a guitar online, be sure to read reviews others, as well as comments from users who have previously made a purchase. 5) Before you buy a guitar, learn all its essential parts, to know what, how, where and in what state should be. I hope my article become a useful guide when buying a guitar.

" Despite the fact that the parents did not support his musical ambitions, his two younger sisters have always been for him. "I think they thought I was crazy when I was 12 I spent a whole day sitting at the computer trying to make music Old school programs. " When Dan grew up and became a fan of The Doors, The Cure and The Pixies, he tried to create their own group. In 1991 he appealed to the hardcore, which led to his acquaintance with the underground electronic music. Dan got a job at pirate radio station such as Fresh FM.

He met with MC Moose, who helped him release an album on Picasso in 1997. The first tracks Fresha "were made in an old school program on a computer Amiga, connected to an external sampler, which I spent all its student scholarship, "he recalls with a laugh. MC Moose poznkomil Fresh'a with Vegas'om (Michael Wojcicki) with whom they have a track Otto's Way (released via Metro, his father played the Drum and Bass scene Goldie and Grooverider). Working under the pseudonym of Absolute Zero, Fresh wrote Colours in Noise for Renegade Hardware, and then met with Maldini (Jason Maldini) and D-Bridge (Darren White) with whom he recorded The Code, published on Hardware Records and became the number one Drum and Bass Radio 1 chart. Fresh, Maldini, D-Bridge and Vegas together in Bad Company UK in 1998. The first release of their record label Bad Company Recordings – The Nine – in 2003 he was named as the best Drum and Bass release of all time (track Fresh'a Planet Dust finished third in the top list Drum & Bass Arena). The Pulse, which was published on Prototype finally secured the high status of Bad Company.

This was followed by releases on Virus, DSCI4, Ram, React and Formation. In 2002, the album BC – Shot Down On Safari was released in North America via Diselboy'ya Human as a double CD. In 2003, Fresh and another Drum and Bass superstar Adam F joined forces to create a label Breakbeat Kaos, who later became home to artists such as Pendulum and Baron, who from afar via a few top singles and launched a series of CD-compilations Junglesound. Single Fresh'a Mo 'Fire is not upheld attention and mainstream scene: Track up to 21 th place in the National UK charts. In 2003, Adam F and Fresh worked with Pet Shop Boys on their hit single, Miracles, and a year later worked with several New York hip-hop and rnb teams. Fresh is co-produced more than half the tracks on the album Grooverider'a, published by Sony Records. Fresh now lives in Maidenhead, between London and Bristol. He recently completed North American tour in eight cities in support of his album Bass Invaderz, where he performed with Dieselboy and MC Messinian. 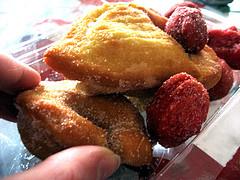 " And so, a journalist with interest opened the newspaper, ran to her eyes, and finding the article, looked at the detective. – Indeed, I wrote it – he said .- And what you are interested in it? – I am interested in photography that accompanies your article. Very, you know, a curious picture. Rather shots. I have asked your editor to show me everything you yesterday there photographed. Bourque laid out on the coffee table a few photos, took a glass and sat in a chair in front of the Heron. 'So.

The interrogation seems to have begun. Well, let's see what I've done it '- he thought. He took pictures and began to carefully consider them. They were almost all made from a single location. Which one is let in the room, chose to have edition.

Usually your articles are always accompanied by photographs Heron, no matter what number to hit a few of them. He liked the process of making one brief moment in eternity. – Carnival as Carnival. Clowns, happy faces, and colorful flags. Add to that music, singing, laughter and get a full picture of the holiday yesterday – he said, putting pictures on the table. – Oh, if your photos could convey the sound, – replied the detective – that they now the prices would not exist. Anyway, for me. – Do you want me to ask if I did not hear anything unusual. Is not it? – Exactly. And at this moment. Take a look.